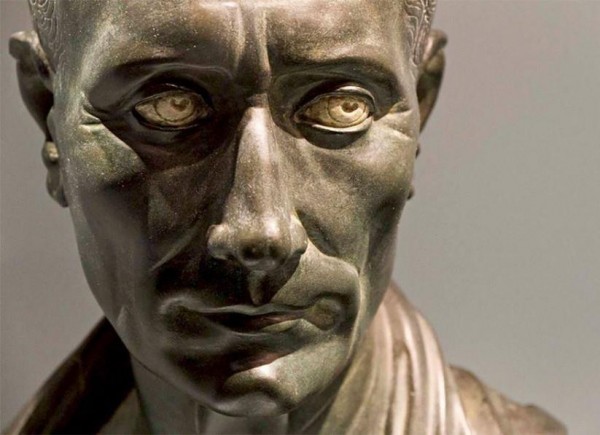 A lousy dancer blames the uneven floor, and Mme Clinton had proven to be an unexpectedly lousy dancer in the competition for the presidency against the blundering New York tycoon. We would expect her to win or lose graciously, as befits a former First Lady, but gosh, she is clumsy – and blames her lack of grace on poor Mr Putin.

He is sure hell of a guy; visitors to Berlin’s AltesMuseum queue up to witness his similarity to the marble bust of Caesar. This is so uncanny that Ms Clinton may be forgiven for claiming the almighty KGB switched the first-century original for a Russian-made fake. You know Putin served in Berlin in his early years.

Caesar was renowned for his multitasking; he could dictate seven letters at once, wrote Pliny. But even Caesar lookalike Putin can’t play the role prepared for him by Ms Clinton and other mainstream Western politicians, that is to bear blame for all their shortcomings.

Last week Frau Merkel had lost an election in her native state of Mecklenburg to a new nationalist party. An honest politician (if such a creature can be envisaged) would confess that by inviting hordes of refugees (however deserving) to Germany and by surrendering German sovereignty to the secretive TTIP rules, she had landed a double blow upon German workers, and they voted against her. Instead, she blamed her defeat on Mr Putin.

Ms Clinton decided to blame her spectacular lack of success on Putin, as well. If she were honest, she’d admit that she is unpopular, even among her own milieu. The scandals around the reptile—sorry Clinton—Foundation do not die but multiply daily, as it seems that the greedy couple charged per meeting and per government contract.

Did Putin ask her to rake millions of dollars from Haim Saban, the Zionist billionaire, or from Wal-Mart, the scrooge of American trading companies? Did Putin beseech her to use a private email server and to mix official and personal business? Did Putin force her to swear she will destroy American coal mines if and when elected? Did Putin convince her to open America’s gates to one and a half billion Muslims, as she said?

Did Putin falsify the Democratic primaries to bring Hillary Clinton her victory over Sanders? Did Putin write the fiery speeches of Sanders unmasking Clinton’s alliance with the “giant vampire squid” of Goldman Sachs and hundreds of thousands dollars they paid her for her “talks”?

Did Putin organise Clinton’s diary in such a way that even the partisan newspaper, theNew York Times said she spends her pre-election time with the ultra-rich instead of speaking to her voters? She goes to the places where people pay $250,000 per person to meet her – by Putin’s advice?

Did Putin push her to call people who consider vote for Trump “racists and bigots”? Did he tell her that will scare them rather expectedly annoy them?

No, he’s a great guy, but such a feat is well above his abilities. Clinton should be afraid of the American people who do not want to take her lip, her greed and her chutzpah for granted. And apparently she is. That’s why she blames her own mistakes on Putin.

Clinton’s supporters, her tame intelligence officials and senators say they are worried that Russians will meddle in the election process and “sow public distrust”. Russians are not needed for this job. Their work – if that is what they want – is being done by Clinton and her supporters.

How can the public trust Clinton who, while being a Secretary of State, solicited Qatar for private donations, and then authorised shipment of American weapons to Qatar’s client terrorists? How can the public trust Sanders, who condemned the Clinton Foundation as a source of corruption, and now has endorsed Clinton while establishing his own foundation under the same rules he condemned?

The claims that Putin is likely to interfere with the results of the US elections are ostensibly based on some obscure hacking incidents in Arizona and Illinois. There is no tangible proof of anything, less of all of Russian involvement, but such a possibility is discussed. My bet is that the establishment wants to prepare Americans for voiding or overturning the election results in the likely case of Trump’s victory. If Trump wins, Clinton’s gang (including the incumbent) will scream “Putin did it!”, they will void the results and pass the buck to the Supreme Court where Ruth Bader Ginsburg and her colleagues will proclaim La Clinton the winner.

“Nobody ever meddled in the US elections, before Putin came” – this claim of Clinton and her supporters in the media and the intelligence community sounds as improbable as a harlot’s protestation of virginity. Putin has no tools or opportunities to meddle. Putin’s Russia has the GDP of Italy, Julian Assange correctly explained when he was asked why he does not attack Russia. Russia is just not in the same league as the US (or China) – though this thought is very painful for a Russian who remembers the greatness of the Soviet Union.

Russians do not meddle in the US elections, and Putin did his best stressing his non-preference: we’ll work with whoever will be elected by the American people, he said in the tense interview with Bloomberg’s Micklethwait. “We are ready to work with any president, but, of course to the extent that the future administration is ready. If someone says that they want to work with Russia, we’ll welcome it. And if someone wants to get rid of us, that will be a completely different approach.”

It is the US that usually meddles in other states’ elections by promoting pro-American politicians, and often successfully. In Europe, from Sweden to Italy, in South Korea and Japan, in Israel and Saudi Arabia, – pro-American politicians lead ruling parties and opposition parties, as well. Only new far-right parties had remained relatively free and that is their key to success.

It is less well known, but the election (or selection) of Mikhail Gorbachev to the post of Communist Party leader in 1985 was achieved by successful US and British “meddling”. His main competitor Mr Grigory Romanov’s plane was delayed until Gorbachev had been enthroned, while Gorbachev’s visit to London was been presented as the sign of universal approval.

The US leaders meddled in the Russian elections in 2011, when VP Biden called upon Putin to remove himself from the race, the US Ambassador McFaul had met with the opposition and Hillary Clinton encouraged the rioters on Moscow streets.

It goes without saying that modern Russia is quite unable to meddle in the US internal affairs with any chance of success.

The claim that Russian hackers provided fodder to the Wikileaks has no basis: now we know that the damning DNC correspondence was leaked by a DNC staffer, the late Mr Seth Rich, who was subsequently assassinated by persons unknown. I would not believe in the story of state-employed Russian hackers for two reasons: Russians are sticklers for rules, and besides, they are forever watched by the NSA, as we learned from Mr Snowden’s revelations.

However, meddling is a normal and usual thing. Israel always “meddles” in the US elections; remember a few months ago the candidates competed about who would be the best at licking AIPAC’s boot (or whatever they are supposed to lick), and Hillary won, hands down. You can read the fascinating Unz story how the British agents successfully “meddled” in the US Presidential race of 1940 ensuring re-election of President Roosevelt and eventually pushing the unwilling US into the Second World War. This story could be supplemented by the Jewish-American meddling in the British politics in favour of the pro-war Mr Winston Churchill.

As for Clinton vs. Trump, in the beginning of the election campaign Kremlin had no preference indeed. Many Kremlin officials preferred Ms Clinton as a familiar face, while they viewed Mr Trump as a dark horse. The pro-Western camp within the Kremlin walls (yes, it exists and it is quite strong) tried to build bridges with Clinton campaign, using Ms Elizaveta Osetinskaya of RBC as their envoy in Washington.

However, the violently anti-Russian propaganda churned by Clinton’s campaign and by Hillary personally changed the mood in Moscow. Anti-Russian hysteria of such magnitude has not been seen even at the height of the Cold War, in the Barry Goldwater and Ronald Reagan era (notably Republican politicians). The campaign against Putin’s Russia mirrors the campaign against Saddam Hussein’s Iraq, and we remember that the newspaper columns were followed by columns of tanks.

Now the prominent US newspapers and sites publish aggressive anti-Russian philippics. Putin is the 21st century’s Hitler –says Newsweek. “President” Vladimir Putin of Russia should not be trusted . I put “President” in quotes as in 2012 he was not properly and freely elected and so does not deserve the respect that the term gives.” – fumes Forbes.

What would you do, if you were a Russian president? Mind you, Clinton people passed a message to Kremlin saying: this is just a PR campaign, take it easy. Still, Putin has all reasons in the world to be worried.

Some American strategists of neocon vintage – and some generals, too – believe they can destroy Russian missiles by a sudden nuclear first strike. They call it “pre-emptive”, though what is it supposed to pre-empt, is a riddle.

Russians must consider that the media campaign may prepare the Western populace for such a strike. President Obama is aware of this consideration, and that is why he proposed declaring a No First Use Nuclear Policy. However, his proposal has been assailed by the U.S. cabinet officials and allies, reported WSJ.

A general feeling is that the world war is possible, if not imminent. President Putin has strong nerves, but no system is totally foolproof. It is possible that the present Clinton-led anti-Russian campaign is aimed at the US voter. But it is equally possible that these calming messages should facilitate a powerful nuclear strike at unprepared Russia.

Perhaps what we think is a replay of 1939 is a replay of 1941, when Germany suddenly attacked Russia, despite their non-aggression treaty. In 1941, the attack had been preceded by many calming and comforting messages from Berlin. A Russian leader must consider such a possibility, for such campaigns of hate can find dynamics of their own.