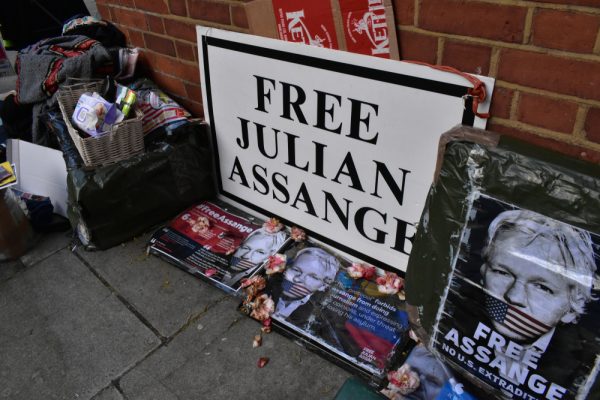 Like Prometheus to whom he was compared, Julian Assange did not escape the wrath of the self-proclaimed gods of Deep State. After seven years of captivity in the walls of Ecuadorean Embassy, the man who gave us an understanding of international politics was shifted to a new and worse jail, the “British Gitmo”, Belmarsh, waiting for extradition to the even worse prison in the Archipelago of CIA jails.

“The arrest was not to help two women in Sweden or to enforce a minor bail infraction. This was never about Sweden or bail violations, or even about the discredited Russiagate narrative, as anyone who was paying the vaguest attention should have been able to work out. It was about the US Deep State doing everything in its power to crush Wikileaks and make an example of its founder. Now the pretense is over.”

President Trump still can save him, as he should feel enormous gratitude to the man who brought him to the White House. Without Julian’s publication of DNC papers, the American public wouldn’t know that Clinton’s candidacy had been promoted by cheating, by destroying the much more likely candidacy of Senator Bernie Sanders. The chances aren’t high, for until now Trump hasn’t help a single man who got into trouble for helping him. But still the US President should know what is good for him.

The shifting of Assange from the embassy jail to the real jail took place immediately after the Mueller investigation came to nought. As the Deep State understood the Mueller report run out of steam, they proceeded to the next stage. Now they will try and force Julian to admit his collaboration with Russia, to ignite the RussiaGate again, and impeach Trump, after all.

The first sign of this new phase was given by arrest of Manning. This brave man had been tried, sentenced, jailed and suffered years of terrible incarceration; he got out only by agreeing to give up his manhood. Still, this mentally tortured person was arrested and sent to jail again, this time for an unlimited time, until he agrees to bear witness against Julian Assange. This method taken from the arsenal of inquisition has been employed, and it did not cause an uproar. His newfound “sisters” who so eagerly insist on call Manning “she” did not move a finger to save him. After arrest of Manning, the arrest of Assange was on the cards. Trump should watch out, or even better, save Assange and save himself.

Julian’s arrest visually reminded me the capture of Saddam. Not much similarity otherwise between the deposed Iraqi president and the dashing scourge of Empire, but the same picture of dishevelled white hair, unkempt beard, humiliating vulnerability of a strong man in the enemy hands, the same disoriented look. He looked like a hermit dragged out of his hermitage, very different from slim, lanky, neat and dynamic young man he was just a few years ago, before he accepted the offer of President Correa of Ecuador. Jail is an awful experience, even if it is a nice room in a Knightsbridge mansion.

Why did he run into this impasse? His friends tried to convince him to surrender to Sweden, saying that in the worst case he will be out in six months, but he said that the Swedes would extradite him to the US and they would never let him go. Indeed we discovered that the Swedes wanted to drop the case long ago, while the Brits, coy and perfidious as ever, pushed them to persist at the same time claiming they act in the interests of Sweden. Now we see he was right, and those who called him ‘paranoid’ were wrong.

The authorities have a nasty tactic: they begin with something small just to get the victim; afterwards, they will roll out a bigger thing. The British police got Julian for a minor matter of failing bail; now they plan to extradite him on a minor matter of hacking; when he will be in the US, they will accuse him of treason or spying or suchlike.

We should fight for his release. It is not only right to save the hero of the people, it is also the way to avoid a new round of RussiaGate bringing us near the nuclear apocalypse. As my name had been mentioned in this connection, I’d state again: Julian had no ties with Russians, he had no intention to go to Russia, Russia had no need neither chance to refuse Assange, and you can read my full explanation of this angle here on this site.

The Deep State wants to unman Julian, as it unmanned Manning, as it wants to unman us all. The attack on Assange is a part and parcel of the campaign to unman humanity. The Empire hates Putin not only because he did not let them seize the country’s assets, but also for his outspoken masculinity. Eric Walberg in his Great Games speaks of the deeper strategy behind the colour revolutions: their organisers “castrate modern states” in order to transform them into post-modern weaklings. This “castration” is an important plan of the rulers, far more profound than the ephemeral struggles over pipelines and resources. The defeat of Julian Assange is a defeat for all the men, and a defeat for mankind, promising a bleak future – unless we shall do something about it. It is not only our freedom but our manhood is at stake.

The best people of Britain are on our side. Jeremy Corbyn spoke strongly against Assange’s extradition. If the government of Mrs May will fall as it well may, Corbyn will have a chance to influence the decisions of the British authorities, for Assange enemies are his enemies, too.

The worst people of Britain are against Julian. Integrity Initiative, the shadowy media group, plots against him. The Guardian, once a wonderful newspaper, became the tool of choice fighting Corbyn, Assange, Russia.

The best people in the US are also speaking for Julian, as Ron Paul did, and as other writers of Unz.com enjoined.

Julian told me once that the elites are forever plotting and conspiring; our job is to throw light upon their dark plans. All journalists and publishers should stand on Assange side – for it is in our professional interests. We should be free to write and publish without fear of being dropped into the Tower, La Bastille or Gitmo. Otherwise the people in power will brazenly take away whatever remains of our freedom and dignity.