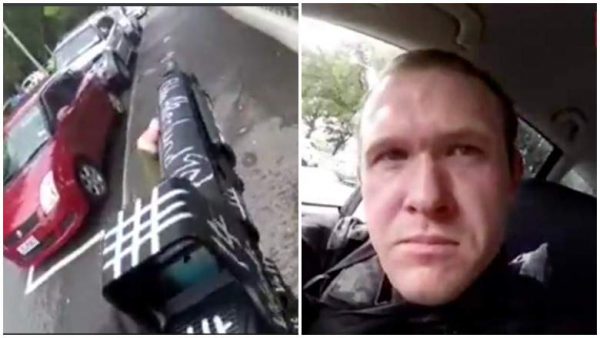 You don’t have to be a white nationalist to commit a mass murder in a house of worship like the one in Christchurch, though if you only read mainstream media you’ll probably associate them with the unique depravity of doing so. Without the slightest intention to wax apologetic for the crime and rejecting conspiracy theories, I want to contextualise the event and preclude political profit-taking and guilt-assigning by the liberals.

White nationalists are not exceptional. A Muslim can do it just as “well.” In Egypt, Muslims massacred in April 2017 45 Christians in two Coptic churches. There is a long list of attacks on churches in Egypt, Syria, and Iraq by Islamic extremists. They kill not-sufficiently devout Muslims, too: over 300 Muslim worshippers were slaughtered by Muslim extremists in a Sinai mosque in November 2017. The ISIS atrocities are on a different (worse) level altogether, though they go underreported in the media that prefers to demonise president Assad and his Iranian and Russian allies.

(Many Muslim attacks on Christians go underreported, for media follow the policy of keeping local native nationalists under pressure, and full reporting would undermine this goal. In September last year, a man poured out petrol and tried to ignite a fire on a subway train in Stockholm. He was stopped by fellow passengers, arrested, sentenced to four years in jail. It was hardly reported at all, and the only report does not give his name, for a good reason: it is a Muslim name. However, so-called hate crimes get a lot of coverage.)

A Jew can do it even better. A Brooklyn Jew, Dr Benjamin (it’s all about the Benjamins, baby!) Goldstein single-handedly massacred about fifty worshippers in the Ibrahimiye Mosque of Halil/Hebron in Palestine on the eve of Purim 1994. He also wounded about 150 Muslim worshippers – though it is said that Israeli soldiers present at the spot gave him an assisting hand. Perhaps they thought it was free-for-all.

Benjamin (or Baruch) Goldstein is considered a hero and a sainted martyr within his community, the fiercely chauvinist Jews of Hebron. They go to his grave and ask for his intercession before the Almighty. Young girls ask him to find them a suitor. Candles are constantly lit in his memory. A book was published in his honour, and his name is frequently mentioned among the settlers. They claim (without any evidence or factual base) that this massacre saved the Jews from being massacred by Muslims.

While white nationalist videos have been de-platformed, YouTube has no problem with this video exculpating and glorifying the Jewish mass murderer. Prime Minister Netanyahu (another Benjamin, baby!) decided to bring the party of Goldstein fans, Otzma Yehudit, into his government coalition, and it did not interfere with his triumphal progress to the AIPAC conference to be held on March 24, right after Purim.

Goldstein had his predecessors. On 26 July 1983, a Jewish terrorist group attacked an Islamic college with hand grenades and submachine guns; three students were killed and thirty wounded. The attackers were eventually apprehended, sentenced and quickly pardoned by the president of Israel after a big public campaign: over 70% of Israeli Jews demanded their release.

As Purim approaches, activity around Goldstein’s grave comes to a peak. A mystic could think that the NZ shooter had been moved to action by the Purim awakening of the Goldstein spirit. At the same time, the name of the Jewish killer is hardly ever mentioned in the Western media, and the Jewish American officials, while expressing their (justified) horror and indignation regarding the Christchurch murders, never refer to their coreligionist who preceded and inspired Tarrant. Some of them even said that nothing similar to the mosque shooting ever happened.

So, white nationalists are not exceptional. An unusual feature of Tarrant’s crime was that it was a hate-less hate crime; essentially a gamer’s crime. Apparently there is a game-acquired appeal in raining bullets upon “vermin”. If you played videogames you would know what I mean. A sort of FPS (First-Person Shooter Games) with your preferred enemy instead of a zombie. And now, make the next step – consider real people being zombies. You do not need hate for that; and Tarrant did not hate his victims, judging by his writing. He even wrote about the great friends he made in Turkey.

The border between videogame and reality became blurred by way of modern warfare. The video Collateral Murder, the first breakthrough achievement of Assange and Wikileaks, gives us the FPS of an American pilot killing innocent and unarmed people on the streets of Baghdad. Israeli girl-soldiers operate a remote-control killing system on the Gaza fence. It is called the Spot and Shoot system. They do what Tarrant did as their daily job. The same is done by drone operators sitting in faraway places and killing children. (To make it easier, they call their victims “fun-size terrorists”.)

It’s not something to be horrified about. We have to recognise aggression as a necessary element of our mentality. It is not “good” or “bad”, this is what we are, in the favourite expression of Mme Pelosi. We have an inbuilt drive for hunt and warfare, that’s why a little boy goes “bang bang” before he is able to talk. This is the way we are hard-wired. People like to shoot people; if they aren’t allowed to in real life, they do it in games. But they dream of doing it for real, to fight, to kill and perhaps, to die. This drive, like other destructive drives, is normally canalised, or sublimated. A boy’s hunting instinct and his drive for war have been transformed into heroic actions, into defence of one’s home and country, or into performing Herculean feats. Without it, we would be still sharing bananas in the African jungle.

However, we live in a feminised society where feats are against the law. A boy is supposed to behave like a girl; a girl, like a boy. Not only clothes and toilets are unisex, so is the indoctrination. The propaganda of gender-fluidity aims at killing masculinity at its root. A young working-class man has very few prospects in life. He can get a low-paid temporary job with no security, at best. And he can pour out his indignation and desperation in a video games saloon or in a fighting club. Or just use more drugs and alcohol.

It is not in the best interests of mankind. For mankind, it is better for men to be interested in women and perform feats of courage for the best of the community to win their love. For the people who consider themselves our masters, there are other priorities. They want to have calm herds of many cows and oxen; bulls are trouble. This comparison is somewhat misleading: humans are not herbivores, and we are more rebellious, clever and strong-minded.

In order to quell the rebellious spirit, our would-be masters invent traps and fake vents. Greta Thunberg and her demonstrations against global warming provide such a faux outlet for the rebellion. The Yellow Vests of France are fomenting a real rebellion, and that is why they are being demonised by the mass media. Our society should be reorganised to allow young men to perform real feats. They want to save the world, and the only things they are being offered is to flip hamburgers or play video games.

This desire to save the world is evident in Tarrant’s Manifesto. He describes the world in which he and other working-class young men are displaced, and though his proposed solution (terror) is wrong, the problem is real. He sees the people he is being replaced with, the immigrants, and he seeks to deal with them.

The replacement is real, but the culprits are not the immigrants he is being replaced with. It’s people who organise the replacement, who bomb Muslim lands to create living hell in the once-prosperous Middle East and North Africa, who bring the refugees to Europe (and its extension in Australia-NZ), who indoctrinate against ‘xenophobia’ instead of denouncing greed.

Actually, Tarrant is aware of it. He wrote in his Manifesto:

The major impetus for the mass importation of non-Europeans into Europe is the call and want for cheap labour. Nothing drives the invasion more and nothing needs to be defeated more than the greed that demands cheap labour… In the end human greed and the need for increasing profit margins of capital owners needs to be fought against and broken.

He is definitely right on that, spot on. Greed of capital should be destroyed in order to save mankind, but killing Muslims is not the right way for it.

Tarrant’s concern about the low birthrate of Europeans is understandable, but for one reason only: he takes for granted this demand for cheap labour and more sales have to be satisfied. However, it does not have to be satisfied at all. If greed is controlled and defeated, and immigration blocked, the population can gently decline until a new sustainable level is found. For a while, the population will grow older, true; but this is a temporary effect. We are not doomed to ever-increasing population, ever-increasing profits and sales, ever-rising shares, endless expansion. It can be changed.

And we should, because if we don’t, our ‘masters’ will organise a giant bloodletting, a new great war to turn millions of deprived young men into Tarrants in their service, as they did in 1914 and 1939. Mankind will defeat greed and work for its better future, or will it turn upon itself. This is the main lesson of the Christchurch massacre.