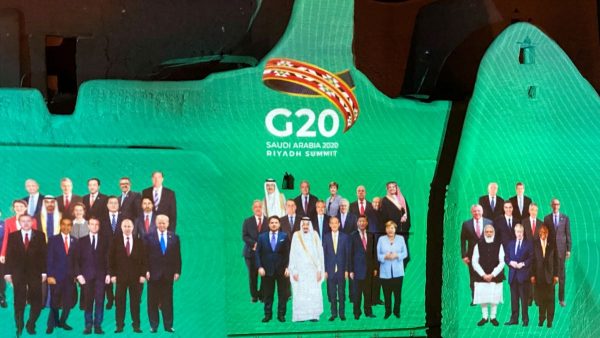 The G20 leaders have reached a consensus of a magnitude previously observed at Warsaw Pact summits. News in brief: they want to vaccinate us, and then, before we become restless, switch to combating global warming. If we survive masks and vaccines, austerity will kill off the survivors.

Remember, before the pandemic there was Greta? Greta will return, as soon as everyone gets a jab. This Save-The-World program appeals to a significant part of humanity, including Russians, Europeans, Americans. First, a jab to save us; then, save the planet from warming. So much of this world-saving is straight out of a comic strip. Now let us take time to look at what is happening.

While you were spending your weekend preparing for Thanksgiving, the leaders of twenty of the world’s leading countries held their Online Summit. Usually they come together, talk, discuss problems on the sidelines – this time it was all online. Although the summit was formally hosted by Saudi Arabia, Zoom is Zoom – the hosts of the summit had few opportunities to show off their hospitality. And there was little controversy. The leaders generally agreed with each other.

The main dissenter – the Orange Monster, aka President Trump – could have shoved a cane into the spokes of the-too-fast-by-half-chariot, but he had no time for them. He was immersed in his battle for the White House in the courts, and in his spare time he played golf.

The previous G20 summit tool place in March, and there they decided to open the gates for lockdown and destroy the world, as we knew it. Before March, the Covid obsession was still a minority interest. Russians just laughed about it. After the March G20 decision, it became the top priority. The November Summit affirmed the March decisions, and went further, much further.

While President Putin stressed at the summit that the main danger to the world is unemployment, poverty, and economic depression of unprecedented scale, other speakers gave the impression that they were satisfied with the current situation, because it allows everything to be rebuilt. Build back better, is the slogan of Joe Biden:

For some, Covid is a plague, but for our leaders it is an Overton window. I’d advise them to eat a slice of lemon before speaking. This, of course, will not help against Covid, but at least it will wipe the blissful smiles off their faces.

(“Eat a slice of lemon before speaking”, was advice given to a lady who complained of getting too much male attention in Italy).

The Chinese leader Xi proposed introducing worldwide QR codes so that without them people could not irresponsibly roam the planet. Nobody objected, but they did not support this initiative either. Xi is afraid that the wily Westerners will impose their own sanitary passports allowing only people injected with Western vaccines to travel. This possibility worried Putin, too, as Russia has developed two or three of their own vaccines. If the Chinese and Russian vaccines aren’t recognised by Europe, their people won’t be able to travel.

The WHO fancied that this virus was not the last; there will be more pandemics, and only vaccinations, masks and generous contributions to its budget will save us. They also promised a new wave of Covid in January, and then another, and so on until the earth will be covered with vaccines. To help poor countries, the leaders declared that the repayment of debts may be postponed, and that vaccines will be supplied to the impecunious nations for free. Free for them, but you will pay for them.

(Not that they need it. Poor countries do not suffer of Covid. China’s neighbour Mongolia, despite open border with China, had no Covid. Poor Cambodia, ditto. Africa, none, excepting South Africa. )

The EU representatives called for Global Rebuilding – Build Back Better. That is, we will rebuild everything, but better and in way which is inclusive, green, sustainable. And much more expensive. And at your expense. The struggle for the climate is austerity under another name; it calls for a radical drop in living standards. We shall tighten our belts, and we will regret that Covid did not relieve us from unnecessary torment.

In past forums, Trump has constantly spoken out against the fight against warming, but this time he resigned himself. And his likely successor, Joe Biden, has already pledged to return America to how it was with the WHO and the Paris climate agreement.

So the worldwide rebuilding, perestroika seems to be as inevitable as Gorbachev’s in 1986. The Russian perestroika killed more people than Stalin’s Gulag; it destroyed the livelihood of millions. The wealth of the Russian people has been looted by Messrs Abramovich, Deripaska et al. From the earliest days of these changes, a minority of Russians weren’t optimistic about the outcome, but they were marginalised and their voices were silenced. Now the same is in store for the disaffected and dissidents – if all 20G take this disastrous route, this is well-nigh unavoidable. I do not know what is worse, the Covid lockdown or climate austerity, but there is no need to decide for we shall have both.

A few numbers regarding climate austerity. The Russian perestroika reduced CO2 emissions by 5 per cent year after year for ten years. The Great Depression was even better: a 10 per cent drop in emissions year after year. Millions of Americans died (The Grapes of Wrath), and nobody told them they were saving the planet. Optimistic researchers with the Global Carbon Project say the emissions should be cut by 5.5 per cent per year over the next 45 years. This is a deadly collapse; what we have now is a preview of what they have in store for us and our children. (You can check the numbers here).

The Chinese do not mind this, as they do not mind lockdowns, face recognition and social rating. Their popular film The Wandering Earth shows a world that fights global warming the Chinese way and depicts a future so grim that 1984 looks Utopian beside it. Even so it was still considered a positive and encouraging film by the Chinese audience. We should not accept Chinese methods of fighting diseases or climate change or indeed general governance. They are too different.

If they insist on fighting global warming, let us begin with them personally. Let Gore and Greta and their followers live ecologically on average salary. It is not difficult to live green if you are a millionaire. Do it on the average income. After you pay electricity, water, rates, transport, school you won’t even think of paying much more for making your car “green” and CO2-neutral. You’d be happy to survive as it is. I’d make it a law: every green activist should surrender his assets for safekeeping and manage his green life on the average income for at least one year.

The summit called for further digitalisation, for increased information flows across borders, for a combination of distance learning with conventional learning. Perhaps some digitalisation is unavoidable, but do we need more of it? We need more freedom, and digitalisation appears to be strongly repressive. It is a good tool for tyranny. Any tyrant of old, be it Hitler or Borgia, would be able to achieve much more in union with Zuckerberg. We need to stop the data giants, tax them to the hilt, make their life miserable, change their CEO by users’ vote at least once a year.

Distance schooling is probably the worst innovation of its kind. And rich folks know it well. In New York, the public schools were barred, but private schools operated normally all right, because distance schooling is no better than learning by watching telly. It also kills social fabrics and habits, making children boorish and unable to communicate. It is unnecessary, for children practically do not suffer of Covid. The main reason of going distant is to make our children even more stupid than they are likely to become anyway after watching YouTube. Another reason is to make them asocial and unable to act together against their betters. It should be outright forbidden, not encouraged.

A detailed declaration was prepared and drawn up before the summit and confirmed by the leaders. It also contains approval of the previous March declaration which began the triumphant march of lockdowns around the world.

Of course, the summit did not make binding decisions – only declarative ones, but they were detailed and unambiguous. Vaccinations, a perpetual fight against pandemics, smoothly turning into a fight against global warming, more austerity accompanied by QR codes on a global scale. What we have is what we shall have, this is what they decided. Masks are now and forever:

The leaders agreed to strengthen the WTO (the United States will return to as it was before under Biden) and strive to create a unified global tax system. The IMF (International Monetary Fund) will be at the centre of efforts to coordinate cryptocurrencies in relation to debtor countries, banks and other financial institutions. Some analysts were expecting a departure from the dollar as a reserve currency, but this has not yet been debated.

In the ongoing discussion between liberal globalism and nationalism, the G20 went for globalism and liberalism on steroids. Though President Trump still hopes to conclude the elections in his favour, the G20 already went the Biden way. It is difficult to understand, as the WTO, IMF, WHO are universally disliked by Russians, Americans and many Europeans, too. This is a sad and discomforting decision.

Humanity has made a big step towards unity at this summit. I am not sure it is worth rejoicing. Disagreement is a dangerous thing and leads to wars, but unanimity can be even more dangerous if it is the unanimity of experts and not peoples.

A comforting thought before you despair: declarations of unity were adopted earlier, in particular, when the League of Nations and the UN were created, but then disagreements took over, and a blessed diversity of opinions came back. I do not think we are ripe for that much of unity.