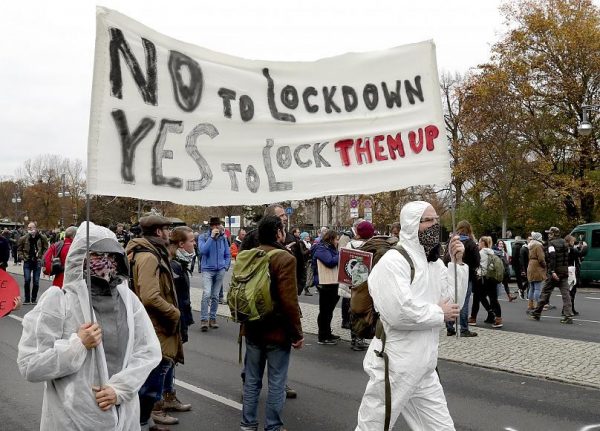 Germany, the powerhouse of Europe and the centre of the Corona restrictions battle, unleashed the Kraken against the disaffected. If you are not happy to wear a mask, stay-at-home, shelter-in-place, you are an anti-Semite. And this is a criminal offense in Germany, punishable by years of prison. It is certainly a scary accusation that can ruin your career, at least.

How did they build the logical chain from Corona to Jews, considering Jews weren’t particularly prominent among lockdown supporters? The Corona protests drew huge numbers of Germans, altogether in their millions. The government described the protesters as neo-Nazis. They unleashed their fierce dogs of Antifa to attack protesters. They tried to shame the protesters, saying they walk together with Nazis. This is standard procedure in Germany and elsewhere: describe your opponents as neo-Nazis and Russian spies. This is very far from the truth, but it does not stop the effort to delegitimise the protest.

The corona protesters didn’t like it. Instead of being against the Jews as described, they actually identified with Jews. They compared themselves to victims of Nazi persecution like Anne Frank and Sophia Scholl. Anne Frank, a Jewish girl in occupied Holland, was forced to stay indoors and hide for many months. Her memory was awoken by an 11-year old German girl who had to celebrate her birthday in hiding from Corona police. Sophia Scholl was a German Christian who bravely spoke against the Nazis and against the mistreatment of Jews. A young German woman said she “felt like Sophia” as she gave away leaflets against the government restrictions. What could be more anti-Nazi than such comparisons? This didn’t help them at all.

Such a comparison is “Trivialization of the Holocaust”, a crime under German law, said Felix Klein, Germany’s Commissioner for Anti-Semitism. He is not Jewish, but a great philo-Semite. It is a violation of copyright, he might add. How dare you compare your goyish problems with the Holocaust? It is only Jews who may compare whatever they like with the Holocaust.

And they do. Last week Peter Wolodarski, a youngish Polish Jew recently appointed chief editor of the liberal Swedish newspaper “Dagens Nyheter” (DN), called Donald Trump “antisemite”, while his editorial columnist Lisa Magnusson compared the brutality of the Belarusian police with that of the Nazis. A shocking trivialisation of Holocaust, this comparison. Fewer people suffered at the hands of the police during after-elections protests in Minsk than in Paris, let alone Nazi times when every fourth Belarusian perished. It is a peculiar claim to call Trump, the best friend of Israeli Prime Minister, an “anti-Semite”, said Stefan Lindgren, the editor of the independent Swedish site Nyhetsbanken. Jews are allowed to trivialise Holocaust and wake up the Nazi memories anytime, apparently.

German Jews were eager to please the government by confirming the Nazi libel. The President of the Central Council of Jews in Germany, Josef Schuster said, “Just as the demonstrators show complete disregard for the health of others so, too, they show no respect for the victims of National Socialism.” Annette Kahane, a prominent Jewish SJW in Germany, went further. Among the protesters there are leftists, rightists, Muslims and Christians. This means that they are united by anti-Semitism, for there is nothing else to unite them with, she said. Annette Kahane is a larger-than-life SJW. She was born into a privileged Jewish family in the GDR, and while at university, collaborated with the Stasi Secret Service, denouncing her schoolmates for their lack of devotion. She recognized the forthcoming collapse of the socialist state, and by the time of the Fall of the Wall Ms Kahane was already a great supporter of unification and a pro-Western freedom-fighter. She was able to hide her Stasi past for a while, but not for long. After unification of Germany, the Stasi archives were open, and her past came to light. But she survived it all right, and founded the German analogue of BLM in defence of black immigrants. Now she is a leading SJW, an anti-fascist fighting for every good cause against all bad causes. Her seal of approval had been quoted by German papers: so indeed, the Corona protesters are anti-Semites, if Ms Kahane says so.

That’s what interests me. Why, if one dislikes some hateful things: banksters, the bombings of Gaza, ill-treatment of Palestinians, George Soros, Charlie Hebdo, Antifa, War on Terror, Blairism, Corona lockdowns and masks and quarantine – it appears to be pure anti-Semitism? Why is the defence of the Jews always connected with defending the nasty policies of the rulers? Why are there powerful Jews who invoke the tragic Jewish history in order to protect certain horrors? Are Jews the willing scapegoats for the rulers of the world? Is there any nastiness the ADL and the likes of Ms Kahane would not subscribe to as their own? Are these immoral persons involved in a sinister plot against real Jews by making anti-Semitism an unavoidable choice of every honest man? Or do they feel some inherent quality of Semitism that we are not aware of?

Logic says, these accusations should be refuted as unrealistic. The Orthodox Jews presented the strongest opposition to lockdowns. In Jerusalem and in New York, they broke every restriction, and overcame every attempt to stop their prayer. They also voted en masse for Trump “the antisemite”. Who is a more authentic Jewish representative, a Jerusalem Rabbi or the shameless SJW hussy of Berlin? The rulers prefer ADL and their German snitches, for they are always ready to add the weight of dead Jews to whatever cause should be promoted.

Indeed, antisemitism is used as a tool and as a weapon everywhere, but it seems Germany is the only place in the world where Corona protesters are deemed antisemites. This is for two reasons. Germany makes it a criminal offence, so it is easy to brandish. The second reason is German Jewry. It is a special case. Once it was the most proud and distinguished of Jewish tribes, but very few of them remained in Germany. They moved to the US, to Israel, or perished in the war. Instead, Jews from other countries moved in. Peculiarly, they consider themselves – no, not German citizens, but overseers of Germany on behalf of the occupying globalist forces. I heard it from German Jews: “We were foisted on Germany so the Germans won’t ever go back to National Socialism”.

Michel Friedman is an example of a new German Jew. He was a politician with the Christian Democrats; then he ran afoul of the law. He hired a few Ukrainian prostitutes and offered them cocaine. Police discovered this by chance; he had to leave politics, but no worry, he became a prominent journalist. While writing for Vanity Fair, he trapped Horst Mahler, the German dissident. After interviewing him, Friedman went to the police and denounced the old man for his Holocaust denial. Mahler was imprisoned and regained freedom just last month after many years of confinement. Friedman is still doing great, he has his own show on TV, and he calls Germans to fight hate, hate that he likely caused himself to a great extent. An even newer German Jew is the pianist Igor Levit. At 33, he feels it is his duty to teach Germans what to think. He said that AfD, the German populist party, is a Nazi party and AfD members were “people who forfeited their humanity”. Bear in mind that AfD is the leading party for young people in many German provinces (Lands). They are populists of the Trump kind: they do not want more refugees, they do not want NATO, they do not want to fight Russia, or anybody else. Levit’s judgement is far too harsh.

An annoyed musical critic, Helmut Mauro wrote: “Levit is known as a Twitter virtuoso as well as a pianist. And that is apparently at least as crucial for a career in 2020 as making music itself. He is forever twitting to right persons and fights wrong ‘uns.” Mauro compared Levit with another pianist, Daniil Trifonov. Both had moved to Germany from Russia, both are quite young, both are natives of Nizhni-Novgorod, but while Levit is the Paris Hilton of music, Trifonov is a real artist. Trifonov’s technical refinement, his perfect legato (which Levit unfortunately does not have at all), his sense of form, his high-risk emotional playing, his sense for the whole, for building tension, for sheer musical intensity, currently lift him far above others. And far above Levit, who receives endless prizes for his opinions.

Mauro was skinned alive, accused of antisemitism and his newspaper apologised for him (he would not). You can’t compare a Jewish and a non-Jewish pianist and prefer the goy, especially if this Jew keeps Germans under control! But things have begun to change in Germany. They do not respond to the dog-whistles like they did before. It is not enough to tell them “Jews good, Nazis bad”. A Trotskyite site reported on the development:

In recent days, Die Welt, Frankfurter Allgemeine Zeitung (FAZ) and Neue Zürcher Zeitung (NZZ) have all published articles defending the SZ’s classical music critic Helmut Mauro and denouncing the SZ for capitulating to public opinion. Die Welt declared a “culture war” and accused the Süddeutsche Zeitung editors of having bowed before “the first violins of the Jacobin orchestra” and the “Twitter brigade of a new left-wing thought police”, while calling Levit a “Twitter inciter”.

The Trot rejects it, calls Mauro and his critique “antisemitic” and supporters of Mauro “right-wing imperialist antisemites”. But that is expected. What was unexpected is that Germans are not silenced by this rhetoric anymore.

Levit received the annual prize for Understanding and Tolerance, which is awarded by the Jewish Museum in Berlin, though what is tolerant about denying humanity to a third of German youth? For sure, the Jewish Museum knows what is the correct tolerance, and to what views no tolerance should be allowed. But this Culture War is not over yet.

The world has great enough difficulties to manage as is, without the additional burden of the Jewish angle. For Jews it is better to avoid inventing unnecessary connections between Coronavirus restrictions and Mosaic Law, while Germans should try and sort out their politics without referring to Jews for good or for ill.