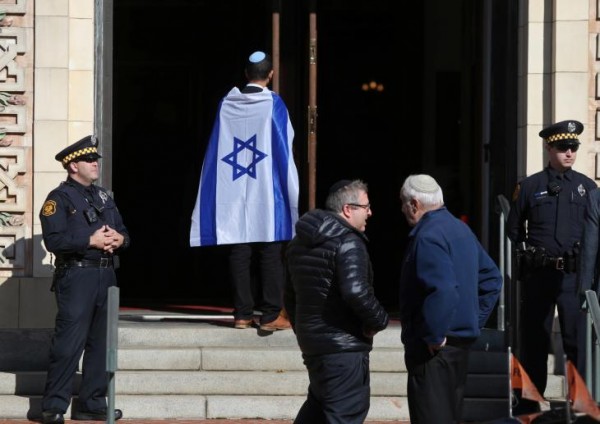 I was hesitant to write on the subject while the Pittsburgh dead weren’t buried yet. I know, it is not a valid consideration for the militant pundits. The US Jews accused President Trump and the Israeli Jews blamed Palestinians for the shooting as on the cue before the victims were declared dead. However, you can’t talk sense before the dead are laid to rest. Now we can deliberate on guilt and blame.

The man who killed eleven Jews in Pittsburgh did it to have his objection to immigration heard. If he would be allowed to say that on his page in Facebook, instead of being blocked, these old people would still be alive. If the New York Times would allow anti-immigration feelings to be expressed and discussed on paper instead of being delegitimised, these old people would be still alive. The closing of all but ultra-liberal outlets for opinion expression had created a powerful pent-up pressure that caused the already unhinged man to go crazy.

If there are no newspapers, no public TV stations, not even a post in Facebook to say what you are eager to say, sooner or later guns will do the talking. Surely the guys who organised this massive silencing and censorship campaign are smart enough to expect exactly this outcome. They aren’t entitled to act surprised.

The US has never had a mass shooting of Jews until now, but the US has never had such an effective silencing campaign with at least half of its population including the President banned from sharing their marginalised views. It is elementary physics, the pent-up pressure leads to explosion. Problems should be discussed and feelings vented, otherwise people will die.

President Trump, a simple soul, said the Jews had to defend themselves and install armed guards. Jews have enough armed guards. There is an Israeli-established institution that trains and arms Jews for the Jewish organisation in Pennsylvania. The US Jews have enough of everything, and a lot of power, but they are short of responsibility. Irresponsible power breeds hubris, while hubris leads to nemesis in the shape of a man with a rifle.

Instead of taking responsibility for their actions, Jews prefer to deny it. At a demo confronting President Trump upon his arrival to Pittsburgh, they flatly denied their actions in favour of immigration. The gunman, they said, “believed anti-semitic lies that Jews were funding the caravan.” At the same time, before the victims were buried, the Jewish organisations, such as HIAS, swore they will continue to deliver immigrants to the unwilling country, even if it is against the law. They defied the law by hiding illegals and protecting the smugglers. This readiness to break or bend the law is a dangerous feature for a powerful but rather small elite group. They should stick to the law with both hands, instead of setting an example of embracing illegality.

Indeed some ethical considerations could be placed above the law, but not with such abandon, not with such ease. Antigone broke the law and buried her brother, but she was not surprised to die for this transgression. These guys break the law and expect to be lauded for that.

Why American Jews support immigration, while Israeli Jews do not allow Gentiles to immigrate into the Jewish state? Double standards, you’d say. They do to you what they do not want to be done to them. – Not exactly. The Jews consider themselves a unique exterritorial community, while other nations are territorial. In the much-loved New Year prayer, the Jews praise Almighty for “He didn’t make us as the Nations of the Lands, the Families of the Earth” (עלינולשבחשלאעשנו כגוייהארצות ולאשמנוכמשפחותהאדמה).

In the Jewish view, the difference between [non-Jewish] territorial nations is of slight importance in comparison with the existential distinction between Jews and the nations of the lands. For this reason, Jews aren’t ‘racists’ – they do not think one race is preferable to another. Excepting Jews, for sure, who are a totally different story. As all Gentiles are quite the same for Jews, preferences (aka racism) of a Gentile are silly and meaningless, in the Jewish eyes.

Iroquois may consider themselves totally different from Huron or Blackfoot, but for the Europeans, all of them are Red Indians. Likewise, for Jews all Gentiles are quite the same.

Though this beautiful Jewish non-racism of being above races is based on theological grounds, it has economic consequences. Jewish economics is a miraculous magic of turning anybody’s blood and sweat into gold, and this magic works fine with whites, blacks and Latinos. Jews were traditionally into money, and the money of the black is of the same colour as the money of the white. The black and the white pay the same rent for the apartment the Jew lets them. The Mexican and the German pay the same commission to the Jewish bank.

Jews are exterritorial, in contra-distinction to the rest of humanity, to the Nations of the Lands. Israel is a brave [British?] experiment to ‘range Jews’ (in the words of Halford Mackinder), and indeed settled territorial Jews of Israel behave like all settled nations: they understand the difference between tribes and object to immigration. The US Jews still act as exterritorial Jews: they approve of immigration as it enlarges the pool of available customers. This is fine; such views are legitimate; Jews always embrace them. What is not so fine, that they tend to delegitimise the regular view of territorial nations.

If there is a lesson to Jews to be learned from Pittsburgh shooting it is “you should act responsible”. The Jews took control over a valuable public resource, that is the US mass media, and use it for their advantage with childish abandon. This is irresponsible. They should allow other views to be published and discussed without being marginalised and delegitimised.

Whenever people complain about Jewish behaviour, the Jews usually answer with the accusation of antisemitism, a mysterious and eternal Gentile hatred of Jews. This is too easy. The second lesson is “be more critical to yourself”. If your child comes home and complains about being bullied, you should ask him in what way his behaviour contributed to it. Bullying is surely bad, but the victim contribution should be discussed and taken care of.

Alas, in the modern paradigm it is not encouraged. There is a veritable taboo on dealing with victim contribution, whether it is the sexual misconduct or immigration argument. While unreservedly condemning the criminal action, we should also help victim by discussing his or her contribution.

If you want to eliminate negative feelings towards Jews, you should listen to complaints. If people complain about Jewish landlords or Jewish bankers, there is a easy way for a Jew, that is to retort “It is an old antisemitic canard” and a hard way: don’t be a landlord, don’t be a banker, eat your bread by the sweat of your brow, behave towards your non-Jewish neighbour in the same way you want him to relate to you. Take a position for regulation of banks and landlords. Do not allow them to skin people, for they will blame Jews.

Do not use your Jewishness as a spade to dig with. If you want to help refugees, or promote free trade or gay marriages, do not say “I do it because of my Jewish principles”, for it is silly. If you want President Trump to be impeached or re-elected, do not call for it “as a Jew”, do it as an American. Leave Jewishness for your Sabbath.

The victims weren’t connected with the immigration issue at all. There is no possible justification for the murder. But the sick head of the murderer accepted as positive truth silly claims of the immigration activists that they act as Jews and for the Jewish cause. They should be more cautious and more responsible before they claim acting for the whole body of American Jews.

Be honest and avoid weasel words. If you support affirmative action for blacks and Latinos, demand the Jews to be counted as a separate group. At present, the affirmative action is fuelled at sole expense of the white Gentiles, while the Jewish students still have their seats at the Ivy League secured, as Ron Unz proved.

If you support immigration of labourers, demand recognition of their learning certificates. If you are a physician, demand immediate acceptance and unlimited entry of foreign doctors. If you are a lawyer, ditto. It is unfair that immigrants you invite and bless can’t compete with you.

If you don’t do it, show your understanding of people who had suffered because of immigration and positive discrimination, instead of calling them ‘racists’. This is called for by the Jewish law saying ענייעירךקודמים, the poor of your town should be attended before the poor of other towns. Usually Jews think it refers only to poor Jews, but you may count it in a more general way.

Some Pittsburgh mourners wrapped up in Israeli flags. This is not appropriate. The Squirrel Hill Jews didn’t come under fire because of Israel, though Israeli government ministers were pleased to use the occasion to do their shtick and call for aliyah and for eternal hatred to Arabs and Muslims (unless they are called Mohammed bin Salman, live in Riyadh and want to fight Iranians). Israeli Jews have their own reckoning; their treatment of Gaza will bring retribution on their heads yet. The US Jews will do wise if they would not undersign this huge and growing debt.

Their own debt caused by irresponsible behaviour should be taken care of. And that can be done by paying heed to complaints of their fellow-citizens.