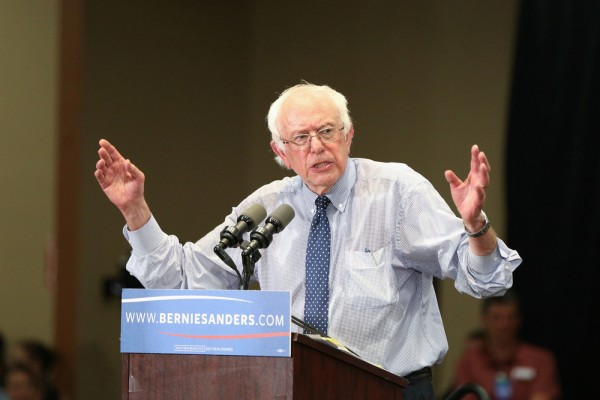 You have to pay obeisance to Israel if you want to become the US President. You have to swear your full compliance with Israel’s demands. You have to run to AIPAC and declare your eternal love of the Jewish state. This is a truism, like “Monsieur de la Palisse was alive fifteen minutes before his death”.

Or so it was until Bernie Sanders turned the tables and changed the rules. We do not know yet whether his game will succeed and he will be anointed the next President. We do not know even whether he will snatch the Democrats’ nomination from the teeth of Mme Clinton. But he already achieved a great victory and toppled the mainstay pillar of the regime.

It is fitting that a Jew would undo the Jewish hegemony in the US, as it was a Communist Gorbachev who undid the Communist rule in the USSR. Some systems are too strong and impervious for an outside force; it is the inner impulse that breaks the hatching egg.

Bernie Sanders did a few unthinkable things, in the short course of his campaign. He refused to go to the AIPAC convention, where the high and mighty are supposed to come and lick the Jewish boot. Not even Donald the Terrible dared to stay away, but Bernie did. He appointed the brave Simone Zimmerman as his Jewish outreach coordinator, the girl who wrote ‘Fuck you, Bibi,’ and called the Israeli PM a ‘manipulative asshole’. The same Bibi Netanyahu whom the Senate and the Congress received with standing ovations unheard since Josef Stalin’s speaking to his Party Conference. Yes, he suspended her, but the deed was done.

Bernie Sanders pushed Mme Clinton to the wall, forcing her to repeat the miserable old-hat claims of “Arab terrorists” and “brave Israel”; worse: to defend herself. Never has an American politician had to defend himself when accused of pro-Israeli bias. This was not considered a bias at all. At the Republican encounter, we witnessed a “normal” scene: Cruz accusing Trump of being lax towards Israel, and Trump grudgingly defended himself. At the Democratic duel, Clinton stood accused. This is a sea change.

The greatest deed of Bernie has been his pilgrimage to Rome and the dawn meeting with the Pope. Just before the decisive New York primary, instead of going to Wall Street and embracing a banker, instead of going to Brooklyn (his home town, after all) and kissing a Rabbi, Sanders left New York and did the most non-Jewish thing a Jew can do: bend the knee before the Vicar of Christ.

Despite their proclaimed pluralism and tolerance, the Jewish establishment is as anti-Christian and anti-Church as it was in the Middle Ages. I learned it on my own skin: when I for the first time referred to Christ in 2002, in a heart’s beat I turned from a brave and popular Israeli into a Swedish Neo-Nazi (there are hundreds of pages in the archives of Wikipedia of such accusations). The Jewish newspapers refer to the Church in two cases only: speaking of pedophile priests and demanding the Church’s repentance. They hate the Pope for more reasons than I can list in this short piece. Sanders’ audience had been an audacious step of defying the Jews and the liberal establishment.

In Israel, a man of the street is vocally against Sanders. “He is not a Jew”, they said to Mondoweiss team. The US Jews seem to split between AIPAC and Sanders.

The question of Israel in the US political life is not just about Israel – this is the symbol of Jewish supremacy. By pandering to Israel, American politicians accept this supremacy. And it is translated in their attitude to the banks, which are as Jewish as synagogues, or more so, and to free trade which is good for Jews.

Sanders rebelled against these classic Jewish attitude: he called to break up the banks, and he spoke against “free trade” agreements which devastate American industry, impoverish American workers and create more happy kosher billionaires. This is worse than being “not sufficiently supportive of Israel” – this is defiance of the Jewish tradition of financial priority.

There were many young Jews like Sanders in 1968; but many turned their coats. Was that because of the teachers’ strike in New York City, as Noam Chomsky told me, when the Jews learned that equality is not in their interests? Was that because they were bought and bribed? Were they seduced by Zionism? Anyway it is wonderful that one man, Bernie Sanders, succeeded to keep the torch burning and carried it all the way to our days, to ignite the millennials, this great new generation of Americans.

We do not know whether he will win, but he already proved that one can defy the Jewish liberal establishment and live to tell the story. Others will come after him, and the Jewish supremacy will be undone as it brought so much misery to the Americans and to the rest of the world. Needless to say, this will liberate the Jews as well and reunite them with the rest of their compatriots.

Israel Shamir can be reached at israel.shamir@gmail.com

This article first appeared at The Unz Review