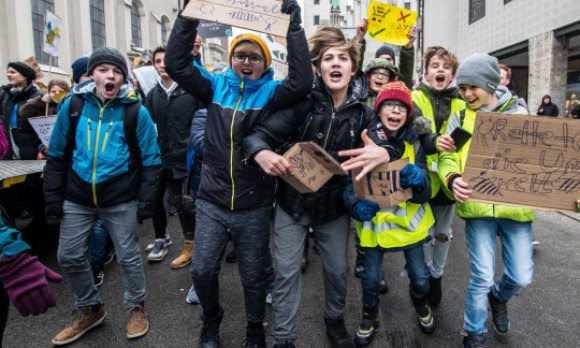 It is cold in the Midwest, so cold that Rachel Maddow already ascribed it to evil Putin (“Russia will freeze you and your family to death.”) It is extremely cold in England, too. I’d think this frost spell should put paid to the silly notion of Global Warming. But no, the adepts of Al Gore sect are not so easily dissuaded. Like the Flat Earth Society, they are impervious to arguments. These enlightened people keep struggling against global warming.

They decided to overturn Mark Twain’s adage Everybody talks about the weather, but nobody does anything about it – and do something. There is a new popular hero, a pleasantly old-fashioned-looking 16-year old Swedish girl with braids, Greta Thunberg, who had sat down in a snowdrift and said she wouldn’t budge until somebody would do something against global warming. She has led a school kids demo for the same purpose, and the European MSM is rapturous.

This is the kind of demo they like; not the evil Jew-haters like the GJ, the Yellow Vests, not the workers asking for wages, not white nationalists calling for a stop to immigration, not the peaceniks objecting to highly justifiable and profitable war in Afghanistan and Syria, not the anarchists foaming at the mouth against innocent bankers, but a good bright friendly march of diverse people with open friendly faces and welcoming smiles. There is no harm in protesting the weather. The obscure power behind the MSM, the Masters of Discourse love such cases. Greta became an instant saviour – she has been sent to Davos to give a speech to the owners of Planet Earth. She was called “almost a Messiah”, and the Swedish Church twitted that Jesus had appointed Greta Thunberg as His successor. (Not bloody likely! If He would pick such harmless causes, He won’t be crucified!). The poor girl (previously diagnosed with Asperger’s Syndrome, obsessive-compulsive disorder, and selective mutism) had been promoted, like… like Stephen of Cloyes, the 12-year-old French shepherd who had led thousands of French and German children on the Childrens Crusade to liberate the Holy Land – and all the kids ended in the slave markets of the East, delivered by the adults who promoted the Crusade.

She organised a school strike. Some teachers objected and said that the kids can march outside of school hours, but the media was indignant: they will learn much more marching against global warming than studying useless math. Computers can do math better than people, while humans should learn to march after the Piper.

“The [kids] should be proud of the non-excused absences from classes on their school reports. … They learn more about civic engagement during a day of demonstrating – mobilising schoolmates, making banners, organising climate-neutral travel and debates (perhaps even with teachers and parents) – than in many a class on politics” – pontificated German Die Zeit.

Whoever does not agree with Greta, should be punished by the hate laws, says the Austrian Der Standard: “The right-wing populists don’t care about climate change, because the answers are complicated and demand a sacrifice from everyone. That doesn’t fit in with the populists’ election arithmetic scheme. It’s much easier to simply brand people as foreign. Or as different, as they do with Greta Thunberg.” Indeed, there is no more tolerance, no place for dissent in mass media today, than it was in 1930s. The agenda had changed, but you have to follow the agenda all the same.

The girl is not completely wrong, mind you. Conservation of nature is a very important thing, and we can do a lot for it. We can construct repairable and durable gadgets, instead of using disposables; we can wear wearable and mendable clothes, instead of throwing them away as they go out of fashion; we can naturally the decrease the population of our countries, instead of importing North Africans and Syrians. But all these initiatives will be bad for sales. Greta objects to meat, so she could demand that Swedish shops stock and sell fish, wild fish caught in the sea, not the farmed variety. Wild fish is better, healthier, saves a lot of energy, but you need qualified fishmongers to sell it, you can’t hire an illiterate immigrant, equip him with a scanner and pay him pennies. So fish became rarity in Sweden. But sitting in the snowdrift or marching instead of studying is hardly a remedy.

Our betters love conservationist causes; they use it to lever extra taxes and hike the cost of living. The GJ rising was triggered by Macron government’s introduction of a new eco-tax on diesel. In Sweden (and in North Europe in general), energy is necessary for survival, but the rulers keep raising energy costs by switching to “green energy”, meaning generated without oil or coal. As a result, tens of thousands Europeans die of cold every winter, and it is not a figure of speech. So they conserve oil and kill people. This is very expected for Greens.

Expensive Green Energy has an additional advantage: it is not bought from Russia, the great enemy of the Masters. Russian gas and oil are cheaper and easier to deliver, but who cares about the price? Consumers, you’d mutter? Who cares about consumers? Not the organisers of the new crusade. They offer two expensive options: American LNG or Green Energy. The Europeans will pay, stimulated by the little Swedish girl. Really neat!

In England, they plan to build a new railway line HS2 using wind farms and other unconventional sources of energy. The problem is price tag, $77 billion to start with, but probably much more. All that will be paid by taxpayers and passengers – while the UK has already very expensive rail. In order to avoid coal (and keep miners from ever earning their bread) – and oil (possibly allowing Russia to sell some) they are ready to throw more and more money.

But what about Global Warming? This phenomenon exists, but it has little to do with humans. We should be modest, as we have every reason to be: humans are still unable to influence climate to a great extent. One volcano produces more output than all mankind in century. Climate changes, true, but those changes, cyclical or not, are induced by factors of different order: by sun activity, first of all, and the sun is not susceptible to school strikes. We may fart all we can, and still it will have a very little influence on climate.

Even more modestly I’ll admit: we can’t prove the thesis this way or other way. We still haven’t got a working mathematical model of the earth’s climate. We are very, very far from being able to predict weather on a large scale. You would never know that if you read MSM. They all know. And any scientist that openly argues for agnosticism will suffer the lot of Dr James Watson of DNA fame.

The Masters of Discourse want to have just one opinion; it is their way or highway. This is what upsets me. My logic, and my conversations with scientists convinced me that we do not know with any degree of certainty whether humanity is able to influence planetary climate, but I wouldn’t ban a scientist who thinks differently. I just ask not to ban any scientist, but that is probably too much.

In 17th century, the advanced scientists believed that the Moon was populated. Johannes Hevelius, an astronomer and a Mayor of a German Baltic city of Danzig (now repopulated by Poles and re-Polonised into Gdansk) gave the Moon-dwellers a name: Selenites. A scientist who doubted (or worse, denied) existence of Selenites would be rejected by his peers as a retrograde exceptionalist, i.e. a believer in exceptionality of Man and Earth (when every scientist worthy of this name knows that Moon, Sun and stars are populated as much as Earth!..)

But belief in Selenites does not call upon our communities to invest in special tools to save them, move them to Earth or build a ladder to the Moon. The belief in man-made climate change is a very costly belief, and it is good that President Trump took his country out of Masters-promoted setup. The wild campaign of promotion for the Swedish girl Greta indicates that the Masters haven’t given up on their plan to impose an undemocratic World government on us, under their control. What else could make us voluntarily freeze in our homes? Like the Fat Boy in Pickwick, they want to make our flesh creep. Scaremongering is the oldest device of population control, and it is the preferred one for the MSM.

They scare us all the time, to get larger budgets and to command more obedience. They scare the Brits that they will “starve among putrefying piles of rubbish after Brexit” according to The Guardian. They scare the Swedes by the mythic Russian submarines. But actually they, the Masters of Discourse and their MSM are the biggest danger for mankind. If we shall succeed in undermining their flagging credibility, we shall save us and our children with more certainty than by sitting in a snowdrift with Greta.