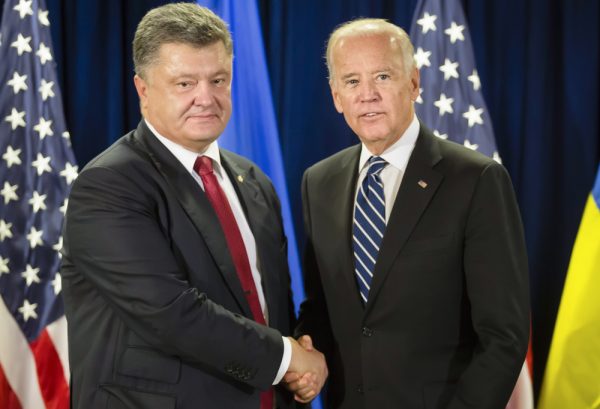 The Borderlands of the Ukraine have been a decisive battlefield for centuries. Here Stockholm, Berlin and Moscow vied for dominance. Karl XII had lost here to Peter the Great; Stalin defeated Hitler; now the Clintonites are likely to suffer in the Ukraine their ultimate defeat. The Democrats had made their biggest political mistake of the century in attacking Trump for the Biden affair — that is, if the Americans retain any common sense.

Vice-President Biden extorted millions of dollars in personal bribes from the vulnerable Ukrainian client state. When this sordid affair came under investigation, he blackmailed Ukrainians, using his position and American taxpayer money to force the sovereign state to fire its Attorney General for investigating the bribes.

Instead of covering their face in shame and dismissing Biden as a potential party candidate in the 2020 race, the Dems led by the superannuated Mrs Pelosi decided to impeach the President for uncovering this rogue. In the well-remembered flick Dirty Harry the lawyers tried to save a criminal by attacking the policeman who didn’t observe the niceties of a Miranda warning. This was the model for the Dems in their impeachment attempt.

Biden’s criminal extortion wasn’t a secret. He boasted of this racket at a public occasion. He famously admitted that:

The Ukrainians put in place someone who was solid at the time, so solid that he terminated the investigation of Burisma oil company. This company was the vessel to transfer bribes to VP Biden, via his son Hunter Biden. John Solomon of The Hillwrote:

“U.S. banking records show Hunter Biden’s American-based firm, Rosemont Seneca Partners LLC, received regular transfers into one of its accounts — usually more than $166,000 a month — from Burisma from spring 2014 through fall 2015, during a period when Vice President Biden was the main U.S. official dealing with Ukraine and its tense relations with Russia.”

The fired prosecutor Mr Viktor Shokin said that Biden fils had been under investigation. After he was dismissed due to Biden père interference, the money continued to pour out of poor Ukrainian pockets to well-stuffed Biden coffers. My Kiev acquaintances had a memory of a good-for-nothing young man, keen on coke and broads, who by himself would never get such a salary.

You would ask, why Biden admitted to the crime? He considered himself untouchable like Mrs Clinton and other people of her circle. Mischievous President Trump decided to prosecute Biden for bribery and extortion, as if he were an ordinary mortal. This was a direct threat to the Clintonites (let us use this nickname for the power variously described as Democrats, Liberals, Internationals, financiers, Masters of Discourse or Deep State). This challenge caused them to abandon caution and to start a furious pre-emptive campaign against cocky Trump.

Their accusation is outright ridiculous: they claim Trump’s intention to bring Corrupt Joe to justice was criminal per se, as Biden was a likely contender for the Dem nomination. As it happens, the US Constitution didn’t find it fit to provide likely contenders with full immunity for past and future crime prosecutions. It’s just the Clintonites were used to be above the law. Indeed, for three years President Trump avoided to touch them. Crimes of Mrs Clinton were well known, from the simple affair of the email server to the Libya murders.

It was expected victorious Trump would unleash the law against the defeated dowager for Mrs. Clinton’s role in the Obama administration’s decision to allow the Russian nuclear agency to buy a uranium mining company. Conservatives have long pointed to donations to the Clinton family foundation by people associated with the company, Uranium One, as proof of corruption, reported the New York Times. The Clintonites saved the old lady’s skin by starting the Russiagate hoax. In 2016 election debate Trump told Clinton that, if he was in charge of the nation’s laws, “you’d be in jail”. But a year later he was in charge, and she wasn’t in jail, not even charged. The ruse of Russiagate worked wonders: the President accused of collusion with Russia did not dare to charge his adversary with this very offence.

Now the Clintonites decided to repeat their feat and began impeachment procedure hoping it will keep Trump busy and away from uncovering the Ukrainian Hell’s Kitchen.

What actually had happened in the Ukraine? In 2014, Clintonites had managed the regime change in this former Soviet republic. They removed the legitimate president by using the full spectre of illegal operations. The Ukraine became a Clintonite colony, and Joe Biden their viceroy in the Ukraine. Biden’s involvement in the coup d’état was his biggest crime, but nobody speaks of that, noticed Joe Lauria. They had turned Ukraine against Russia and instigated the civil war in the East of the poor country, despite strong efforts of president Putin to keep Russia out of Ukrainian turmoil. But they also gave a thought to personal profiteering, like they did in Russia in 1990.

Joe Biden had been treated royally in Kiev. He was asked to chair government meetings and proudly sat on the Presidential seat. The Ukrainians are not famous for their subtlety. Nice people, but rather simple ones, even by East European measure. They became involved in 2016 election campaign on the Clintonite side. There is no doubt VP Biden was the man who directed this “foreign involvement in the US elections”. The obliging Ukrainians delivered to him the dirt on Paul Manafort, and Manafort went to jail.

The Ukraine is the second home for CrowdStrike, the cyber-security company that was instrumental in accusing Russia of meddling. Its founder and head, a Russian Jew and American citizen Dmitry Alperovich is a pathological Russia hater on the model of Masha Gessen and Max Boot. People in Kiev say he had built the case against Russia on the strength of a single server allegedly used for hacking the DNC. The server is located in the Ukraine, not in Russia. President Trump asked for its whereabouts in his conversation with the Ukrainian President Mr Zelensky.

The subject of the server makes many people in the Clintonite camp extremely nervous. They already marked it with “conspiracy” marker, meaning you may not touch it. In another “conspiracy debunking” item they created a straw man, saying “the notion that there is some missing “server,” and that the server might exist somewhere—like in Ukraine—has no basis in reality. The DNC’s network consisted of many servers and computers”. However, the server Trump asked about is not the DNC server, but the server allegedly used to hack DNC server. It had left some Russian-language traces, and it was presented as a proof of Russian involvement. But Alperovich’s hackers in the Ukraine also use Russian as their working language, and this allowed the Russia-hating Jew an opportunity to create the whole chain of “proofs” of Russian hackers’ activity with fancy names. Recovery of the server would put paid to the whole myth of Russian hacking, and would make the Clintonite case untenable.

Alperovich, obsessed with his hatred, could cook the case of Russian meddling, but it had to be ordered and utilized by somebody up the feeding chain, most probably Joe Biden. And now Joe Biden, the real criminal, who took bribes and blackmailed the friendly state officials, who orchestrated foreign involvement in the US elections, went on to become the leading contender for Dem party.

The Dems claimed Trump threatened to withdraw funds from the Ukraine if they won’t cooperate with the US enquiry. This claim had been debunked after the full transcript of two Presidents’ chat had been published. But even if it were sterling truth, it would be business as usual for the US. You probably remember the threats of cutting aid that were issued by the US representative in the UN in order to force sovereign states to vote for Israel. The execrable Nicky Haley said, ‘The US will be taking names’, and Donald Trump added his own threats to cut aid.

How could they find fault in Trump allegedly threatening to cut aid to Ukraine if they think Biden was perfectly all right for doing exactly that? But these guys aren’t playing cricket.

All but one: Igor (Benny) Kolomoysky, a maverick Jewish oligarch and a friend of the President, is an enemy of Clintonites. He also stands against IMF, International Monetary Fund, the powerful bankers’ body that issued many loans to the Ukraine. Just this year, Kiev has to pay six billion dollars to the IMF to remain solvent, and IMF refused to refinance it. The loans were mainly stolen by the gang of the former President, Mr Poroshenko. People in Kiev say that about 1.7 billion dollars of the latest loan had been pocketed by the American supporters of Poroshenko, meaning Joe Biden and his ilk. Now Mr Kolomoysky suggests the new Ukrainian president may default on IMF loans.

Kolomoysky is also the only oligarch who is not in bed with the liberals. The balance of power in the Ukraine is not in favour of Trumpers. The Ukrainians like to back winners; once they made a mistake supporting Mrs Clinton, as they were sure she would win. Perhaps they will make this mistake again. It would depend on the actual Dem contender. Joe Biden had cooked his goose by taking too many bribes in the Ukraine, but another contender may have a better chance, the Ukrainians think. Mrs Warren, perhaps?

They even fiddle with the idea of Mrs Hillary Clinton running again and winning this time. The Ukrainian oligarchs, and first of all Mr Victor Pinchuk, a Jewish billionaire from Dnepro city, No. 1 among the rich Ukrainians, would do anything for her. He contributed many millions to her fund; he finances the Atlantic Council, the Clintonite think-tank, fighting against Russia and Euro-sceptics. He is ‘the wealthy businessman’ Trump referred to in his talk with Mr Zelensky. Judging by Trump’s interest in the Ukrainian server, the President is aware that the old lady is still able to do some mischief, and his promise to take her to jail is still unfulfilled.

It is possible in the presidential race 2020, the Dems will use drafting technique, as the long-distance runners (or bikers, or cross-country skiers) do. The first leading contender (in our case, Biden) would get the flak, get exhausted, and in the last moment he would withdraw from the race yielding the nomination to his well-rested comrade, be it Warren or Clinton or whoever. Bearing that in mind, Trumpers could keep some of the ammo they have on Biden (and there is a lot to find in the Ukraine) until (or rather if) he gets the nomination.