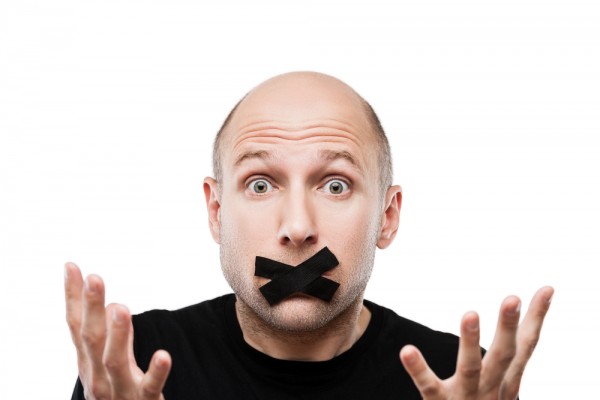 Our grandparents faced a quandary when they had to describe some body parts or physical activity. The ‘obscene words’ remained taboo at least until D.H. Lawrence broke the prohibition in Lady Chatterley’s Lover, and the four-letter words became printable only recently. However, now we have new banned words, or words one can use only at one’s own peril.

‘The Jews’ is such a word. Speaking about the Jews is fraught with consequences. Jews do not like to be referred to, unless in extremely flattering terms. You are likely to be banned in Facebook and other social networks for referring to ‘Jews’. You can be fired. Even a hundred years ago it was a troublesome step, likely to cause social ostracism.

Therefore, there is a permanent demand for euphemisms.

There is one big problem with these words. They clearly show that you are afraid to write the J word. And they know how to deal with frightened persons. It is enough to murmur in response, “It’s an antisemitic slur”, and the guy will collapse in a paroxysm of denial. There is a second problem: it makes very little sense to call the Bolshevik Jews “Zionists.”

The Jews themselves have proposed a few euphemisms of their own: ‘Hebrews’ or ‘Israelites’ were the preferred ones, but they didn’t make much inroad in the English-speaking world. However, ‘Hebrews’ became the official designation of Jews in Russia, while the ‘Jews’ moniker had been outlawed, though it survived in Poland and the Ukraine.

Now the US has produced a new word: “globalists.” The Huffington Post called the tweet of Donald Trump about the dismissal of “globalist Gary Cohen” – anti-Semitic. It turns out that a “globalist” is just a Jew. For example, globalists like gefilte fish.

This neologism pleased Ann Coulter, and she amused her numerous readers with her tweets: “Paul Newman is only half globalist,” “How many globalists came under the distribution in the fight against male assault and harassment!”, “Israel is the last refuge of globalists.” These Tweets received thousands of likes and reposts, and caused an angry condemnation … of globalists.

Mahmud Abbas, the president of Palestine, created an euphemism accidentally. He called the US Ambassador to Israel a “son of a bitch”, and His Excellence Right Honourable Ambassador David Friedman said it is was an “antisemitic slur”.

The whole of political correctness (PC) grew out of extrapolating this Jewish attitude to other groups. In the PC culture, the word ‘Negro’ was displaced by “Black”, and then by ‘black’ in low case, and then by “Afro-American”. Thus PC had created a new fence around the ban.

PC is this additional fence. If today you refer to a black person, tomorrow you will be tempted to refer to Jews. And if you refer to Jews, perhaps you will do so in unflattering terms. The concept of micro-insults and micro-aggressions completes the fence.

And now we have a new fence: a reference to ‘bankers’, ‘moneylenders’ and even ‘globalists’ has become forbidden, as in the case of George Soros. The Hungarians referred to him as a “globalist banker” and the Jewish world rushed to his defence. Not that he is liked by his fellow Jews, he isn’t, but they have to fight the breach in the fence. You know the logic: today you call Soros ‘’a globalist’, and tomorrow you will call a Jew – a Jew.

President Putin did just that. In an interview with Megyn Kelly, he answered her question about the 13 Russians who were indicted by Mueller for alleged interference in the elections: “They do not represent the interests of the Russian state. Maybe they are not Russians, but Ukrainians, Tatars, Jews with Russian citizenship. Check it out.”

He was attacked ferociously. The leading Jewish organization ADL (Anti-Defamation League) referred to the Protocols of the Elders of Zion (this is their standard response whenever a Jew is mentioned), and added, “Don’t you dare blame the Jews for interfering in American elections!”

This is especially piquant – if there is a foreign country that actively interferes in the US politics and elections, it is primarily the Jewish state and its supporters. American friends of Israel, Sheldon Adelson and Jeff Katzenberg are the largest donors; and in general Jews spent more money on presidential elections in the US than on helping needy Jews. Israeli diplomats are actively interfering in American elections at all levels, as the Jewish website Mondoweiss writes. But you can mention that only in marginal publications on the verge of a ban from Google and Twitter.

And in Israel, the energetic young MK Xenia Svetlova, (a Knesset Member for the Zionist Union), accused Putin of anti-Semitism and called upon Netanyahu to ‘protect the Jews’. It’s nothing personal – Xenia grew up in Moscow, worked for Russian TV channels, even loved Russia, but when she went into politics, she had to prove that she was not a Putin stooge. And she calls for Israeli intervention in Syria against Assad and Putin, and for the condemnation of Putin’s anti-Semitism.

The Tatars and Ukrainians did not resent Putin’s words. The Russian Jews in Russia dismissed it, too. For a good reason: the taboo on the word ‘Jew’ is not universal. It does not exist in Russia. Russia is the land of many native ethnicities, a hundred and fifty or so, from Yakut to Mordva, and people freely refer to all of them without fear. The Jews in Russia are just another ethnicity, or ethnos, or nation, one of many. ‘Russians’ in Russia connote members of Russian ethnicity, the most numerous nation of the Russian Federation, not the citizens of Russia, as you would expect.

This attitude may surprise an American, or a Frenchman. It is not totally unknown in Europe, where Walloons and Flemings populate Belgium, and Catalans and Basques live in Spain. Still, a Frenchman of Brittany or Provence is a Frenchman first, and a Breton or Provençal a distant second. In the US, ‘ethnicity’ is a domain of recent immigrants, Greeks or Poles; the Americans have race and religion as identity-forming factors.

In Russia the ethnic identity has been enforced since Stalin’s days: it was actually recorded on the ID. I explain this by Stalin’s personal perceptions: a native of Georgia, the country in Transcaucasia, he was brought up in the local tradition of ethnic awareness. For Russians proper, this ethnic identity is of little importance. They know of it, but do not consider it greatly important. That is why in modern Russia ‘ethnicity’ is not registered on the ID anymore.

Of course, Megyn Kelly, while referring to ‘Russians’ indicted by Mueller, had meant ‘citizens of Russia’, and not ‘ethnic Russians’. Me myself, like the majority of old émigrés, also refer to “Russians” meaning people in Russia or from Russia, or even people from the former Soviet Union. In Israel, every person whose origins are in the USSR is called ‘Russian’, to the chagrin of Russian Jews. They would like to be called ‘Jews’ in Israel, and ‘Russians’ in Russia, but alas, it is other way around, they are called ‘Jews’ in Russia and ‘Russians’ in Israel.

Russian ethnic nationalists of the kind embraced by my colleague Anatoly Karlin would like to keep the ethnonym ‘Russians’ just for themselves, but they are harmless, you can disregard their whines – they aren’t globalists for you.

Now, for the first time ever, the Russians are being trained to stick to American word usage. This is done by Facebook, a platform that millions of Russians use. Besides opening Russia for American business and stealing its data, Facebook is a powerful enforcer of PC in Russian minds. Whenever you refer to blacks, Jews, or even Ukrainians you risk being banned for a week or a month.

As unusual this attitude is for the Russians, they are susceptible for training, as we all are. These small punishments go a long way to bring Jewish hegemony to Russia. Beside protecting Jews, or Blacks from micro-insults, the banning of words has a powerful impact on the mind. Whoever tells you what you may or may not say, is a person of authority. This way of subduing people to your command is called Neuro-Linguistic Programming (NLP), and the CIA is on the forefront of using this black magic of words.

Israelis, and Jews in general do not accept these taboos. It is perfectly all right for Israelis and Jews to refer to ‘Jews’, or worse. The late Israeli MK Ze’evi, a popular right-winger minister, called Martin Indyk, the US Ambassador in Israel, a ‘Jewboy” (יהודון); Netanyahu’s aide called another US Ambassador a ‘Jewboy’, too. Israelis speak freely of blacks; they do not speak only, but deport them as well. They do not mind banning non-Jews from renting apartments quite openly, too. This disregard of taboo gives Jews an additional power in dealing with Gentiles, like a disregard of the Matrix gave supernatural powers to Neo.

The Palestinians disregard the taboo, too. They do not hesitate shouting “Jews are coming”, when Israeli soldiers on their jeeps roll into their villages. Americans of Palestinian origin are scrupulous with their observance, they never utter the forbidden J-word, (unless they want to say something nice about a Jewish friend), otherwise they speak of ‘Zionists’. That is why Palestinians in Palestine are free, and Palestinians in the US are not, like all Americans.

This taboo should be broken. Until it is done, the Jews will continue to dominate the discourse and the US society, the Palestinians will suffer, the bankers will grow fat and prosperous, legal and illegal immigration will continue unabated. Saying “Jew” will have a liberating effect, like mouthing the name of Rumpelstiltskin. And it is much shorter.