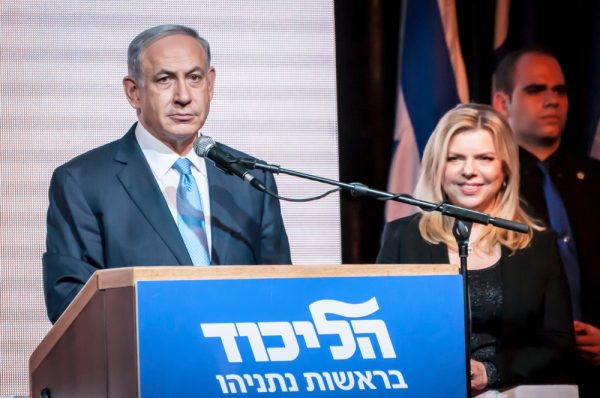 Israelis held new snap parliamentary elections, as the previous round in April had been inconclusive. Surprise! The new round has been also inconclusive. The voters could not make up their mind and choose between Tweedledum and Tweedledee, two major parties of little substantial difference. The only noticeable distinction is personal: one party, Likud, is lead by Mr Netanyahu; another party, B&W (Blue and White, the colours of Israeli national flag) is dead-set against Netanyahu. Their policy, otherwise, is identical; the leaders of B&W are ready to join Likud-led government provided Netanyahu takes a hike. Likud has no problem in joining with B&W if they would agree to accept Netanyahu.

Netanyahu sticks to his Prime Ministerial seat like Adonijah to the horns of the altar (1 Kings 1:50), for the moment he lets off he would be tried for assorted crimes of a pecuniary character and carried off to gaol. While he is a PM, he is immune, and he intends to stay immune as long as he can.

Netanyahu will fight to the bitter end, no holds barred, for he does not want to go to jail. In Israeli politics, the politicians and statesmen are imprisoned so often that it appears a normal professional hazard. Perhaps the idea that ‘no one is above the law’ sounds good to you, but it is a very troublesome concept for it makes a person in power unwilling to relinquish the reins. The B&W leader’s will for power can’t be compared with Netanyahu’s desire to remain free. The Prime Minister almost started a war with Gaza a few days ago, but his generals refused to march it was reported. If he gave orders to shell Gaza before the election, what shall he shell while facing defeat? That is why I do not expect a smooth transition of power.

Liberal American Jews are involved: they want to break off the Netanyahu-Trump connection and to restore the bi-partisan standing of Israel in the US politics. Wily Trump created a schism between Zionists and Liberal Jews. Netanyahu is a great friend of President Trump who is a great friend of Israel. Naturally he is not a friend for Democrats in the Congress and Senate, and he is not a friend for the US Jews, predominantly Democrats. This is a new development; Netanyahu is not the non-partisan figure he was when the Congress applauded to each word off his lips. That was in Obama days; Obama loved Liberal Jews and was not very friendly towards Israel. Netanyahu hated and despised Obama, but he befriended Putin and Trump.

The Liberal Jews in the US and in Israel, closely connected with the deep state, intelligence agencies, finances, and media in both countries want to get rid of Netanyahu and install a man of their own who will chill the Trump connection and restore the old link with the Democrats. Hopefully he will restore the bipartisan standing of Israel. Such a man is General Benny Gantz, a good-looking lanky man slightly similar to late General Yitzhak Rabin. He is supported by Avigdor Lieberman, a shrewd politician.

Probably here is the right moment to remind the reader that in this story there are no good guys. Israeli politicians, whether pro-Trump or pro-Democrat, are equally evil and bloodthirsty. Prime Minister Netanyahu is complicit in uncountable murders of civilians, though the Israeli media only accuses of some financial irregularities. Killing Palestinians, bombing Iraq, Syria, Lebanon, inciting US wars from Iran to Afghanistan is a feather in Netanyahu’s cap, according to Israeli morals. His opponent Benny Gantz is a war criminal who is wanted for numerous war crimes he committed in 2014 as the commander of the Israeli assault on Gaza. He actually boasted of committing mass murder in his campaign ads.

One boasts of killing 1,364 Palestinian terrorists during the war, while another says that under Mr Gantz’s command “parts of Gaza were sent back to the Stone Age.” The videos make no mention of the 1,462 civilians killed during the conflict, according to a UN count.

reported The Daily Telegraph. Now that we have dealt with the question of moral preference between the twain (there is none), we can proceed.

The man who undermined Mr Netanyahu is Mr Avigdor Lieberman, the head of his own small party. Until recently, it was predominantly a “Russian” party of elderly émigrés from the former Soviet Union. Mr Lieberman is a hawk, or rather a chicken hawk for he never served in the army. He demanded bombing Gaza back to the stone age, bomb the Aswan Dam, executing Arab guerrillas; he never asked anything for his own electorate, but they did not mind and voted for him, time and again.

Lieberman served under Netanyahu in all his governments, as a Defence Minister or a Minister of Foreign Affairs, and he was considered a sure partner in a new government. But after April elections, he rebelled and demanded drafting observant Jews into the army. Failing that, he is out, he said. And he was out, for Netanyahu was forced to choose: to part with Lieberman or to part with Jewish religious parties. He didn’t want to part with his loyal and undemanding observant Jews to please the troublesome Moldovan politician. Without Lieberman, Netanyahu could not form a coalition, and the country went to new elections.

Since April, Lieberman upped the ante of his anti-clerical rhetoric. He said he wouldn’t sit in a government comprising Arabs or observant Jews. He proposed forming a grand secular coalition of Likud, B&W and his own party. I think it is a misnomer: Likud and B&W can form a coalition without Lieberman any time they want, and the Jewish religious parties will eagerly join it. Anti-clericalism has a very limited appeal in Israel. You can’t convincingly claim God Almighty promised you the Holy Land, if you deny His existence and His faith. You can’t vote for the Jewish State Law declaring Israel is the Jewish state for Jews, and keep Jewish religious parties out of government.

There are Israelis who dislike the Jewish religion. Some of them consider themselves “Israelis”, but there aren’t many of that ilk. Gilad Atzmon recently argued with a Haaretz journalist about who won the elections, Jews or Israelis. Pfeffer suggested the majority are Israelis and Jews, not single malt. Israelis were defeated by Jews, said Gilad. In my view, anti-clerical Israelis are a rare brand, and not an especially wonderful one. They are extremely short of compassion. Religious Jews have some modicum of compassion towards other Jews; irreligious Jews have no compassion to anybody. That’s why I think Lieberman will eventually lose his bet. But meanwhile he harvested many votes of Israelis who hate the religious Jews.

Jews and Israelis, religious and irreligious Jews are perfectly united in their rejection of non-Jews. The third party by size, after Likud and B&W, is the Joint List, the party Israeli Palestinians (“Arabs”) vote for. Israeli Jewish parties swore they would never sit in a government with the goys. They prefer to have no government rather than have a government together with Arabs. It does not matter that these “Arabs” are citizens of Israel – the Jews are not famous for sharing anything, especially power. Neither Likud nor B&W want to let them into a government coalition. There is no tangible political difference between the big parties in this aspect.

Netanyahu claimed he belongs to the Right, while his opponents are the Left. Bollocks! The Jewish Left does not exist anymore. Once it was strong; it was the force that created the Jewish state and the mighty Army of Israel. It ruled for 30 years unopposed, and afterwards intermittently, but now it is dead. There was fear that the Labour Party wouldn’t even make it to the Knesset; it made it – just. I, for one, won’t regret its demise. They had their chance to sort out the relations with Palestinians, the most important problem of Israel, but they blew it. The Israeli Left, like an American or French Left is concerned with gender problems, with illegal African immigrants, with feminist issues – their Palestinian neighbours do not interest them.

The Palestinians and their fate haven’t been on the agenda in these elections. The parties did not even bother to propose some treatment to this terrible state, when millions of human beings are deprived of most basic rights just because they aren’t Jews. Still Palestinians with Israeli citizenship (Jews call them ‘Arabs’, while Palestinians of the West Bank call them Palestinians-[19]48) went to vote and elected 13 MK, among them one great Jewish communist, Offer Cassif. This fraction could break the deadlock and save Israel from itself – if a Jewish party will break self-imposed taboo.

Trump and Putin gave some cautious support to Bibi Netanyahu. Trump had promised to present his grand plan after the elections. He did not object to Netanyahu using his images for the election ads. The fall of Netanyahu will be a terrible blow to Trump, said a liberal Israeli journalist, usually hostile to Trump and Netanyahu. However, even he noted that Trump did not go far enough to help Bibi.

Putin agreed to meet Netanyahu a few days before the elections, providing him with a good photo opportunity. Still, Putin refused to give Netanyahu anything more tangible, like a condemnation of Iran or a promise to observe Israeli interests in Syria. Moreover, Putin condemned the Israeli bombing of Syria at his meeting with the Turkish and Iranian presidents in Ankara.

On the other hand, President Putin came in person to meet the main American supporter of Netanyahu, the casino billionaire Sheldon Adelson on September 17, the Israeli Election day, at the gathering of Keren Hayesod, or United Israel Appeal, in Moscow. The United Israel Appeal is the fundraising arm of the Zionist movement, one of Israel’s three national institutions (along with the government and the Jewish Agency), raising money for the state. At its biannual sessions (like the one that took place in Moscow) the world’s foremost Jewish philanthropists, the fattest cats get together and gift millions of dollars to the Jewish state.

President Putin had been the guest of honour at this gathering, and he referred to his recent meeting with Prime Minister Netanyahu. Putin said, “Prime Minister reminisced of his grandfather the Rabbi frequently appearing at the Keren Hayesod actions. He was an excellent orator, said the Prime Minister, and for his eloquence he was compared with the renowned Jewish poet Hayim N Byalik. Netanyahu cherishes the Keren Hayesod diploma of his grandfather etc”. A Kommersant (an important Russian daily) journalist who reported on this event, felt that the Russian President went, perhaps, too far in his lauding of the Israeli Prime Minister.

Putin and Trump hedged their bets. They expressed enough support for Netanyahu to be seen as his benefactors if he wins, and as friends of Israel rather than of Bibi personally, if he loses. Probably both presidents will regret his departure, as the liberals of Israel do hate Trump and Putin, just like their American brethren. But for Israelis and Palestinians the change will be small.