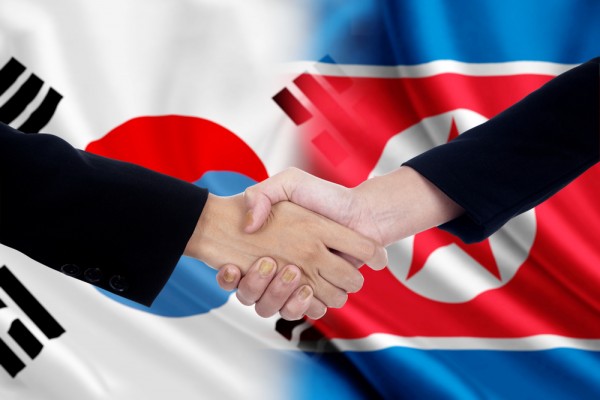 A wonderful, joyful day, a jubilant summit! On the bloody 38th parallel, for the first time in many years, the two Koreans met, the leaders of the two Korean states. There were affable smiles and a spontaneous brief and unscripted visit of the southern president to the northern country, and then the northern one – to the southern one. Kim led his colleague over the concrete lump marking the border of two worlds. Now there are hopes of getting out of the impasse into which the Koreans were driven, and on the horizon – the hope of the two states’ reunification.

Only a few weeks ago, President Trump had threatened to erase North Korea from the face of the earth and kill tens of millions of civilians, boasting that he had a bigger red button (or was it missile?) than Kim. It turned out that Kim’s will was stronger than the American’s will; and willpower is more important than gun power. And best is will power reinforced by armed force.

Trump’s threats bore an unexpected benefit: the President of South Korea looked into the abyss and saw his country and his people driven to annihilation. He saw that – and took a step towards reconciliation, showing an unexpected independence of mind.

Many years have passed since the forces of its former allies, the Russians and the Chinese, left North Korea, but the Americans do not even think about leaving the South. The ruler of the North, Kim, can do anything that his people agree to do. But the ruler of the South, Moon, must defer to Washington for every important decision. Many presidents of the South have been removed, imprisoned, or killed by the Americans and their agents for their attempts to reconcile with the North. We’ll see whether Moon will be able to stay in the presidential palace after this summit, but he took a chance, and this will be written to his credit in the history books.

There is no doubt that the people of Korea, of the North and the South, want peaceful reunification and the prosperity of their country. But so far the US has prevented it. The US deep state preferred to have its military bases in South Korea with its nuclear weapons aimed not only at Pyongyang, but also at Beijing and Vladivostok. Last year, the US brought in its THAAD missile defence system to South Korea, directly threatening the North, Russia, and China.

The Americans outlined the goal of the talks as they see it – the nuclear disarmament of North Korea. This is all that interests them. A North Korea without nuclear weapons is always vulnerable to a volley of Tomahawks, as in Syria. But Kim is not that simple. Instead of “nuclear disarmament of North Korea,” he proposed “the liberation of the Korean peninsula from nuclear weapons” – and, importantly, these words were repeated by the president of the South.

The liberation of the peninsula from nuclear weapons means, first of all, the removal of American bases and occupation forces, and the banning of American ships capable of carrying nuclear weapons from entering Korean ports. And then, without the invaders being present, the two independent Koreas will agree on their own terms. This, roughly, is the logic of Kim – and Moon accepted it, uttering the cherished words “the liberation of the peninsula” instead of “the elimination of the North Korean nuclear program.”

Russia as an original member of the nuclear club has traditionally supported the idea of ​​nuclear disarmament of all non-member countries. But it does not actively insist on it, if only because India, Pakistan and Israel are among the new nuclear powers, and the last not only did not sign the non-proliferation treaty, but also does not agree with any control over its nuclear weaponry. Under these conditions, it makes no sense to insist on the nuclear disarmament of North Korea. But, let us repeat, Russia is for disarmament. If this disarmament brings about the elimination of US bases in South Korea, this can only be welcomed.

The summit in the DMZ (demilitarized zone) has already had an effect. We have no doubt that the North is short of freedom, but in the South, there is certainly freedom of speech, isn’t there?

It turned out that in South Korea until this very day no one had seen or heard Kim, the North Korean president, on a video or in live broadcast. The Independent, a British quality newspaper, reported:

Until the meeting, many South Koreans had never actually heard Kim Jong-un speak. The leader is usually seen only in heavily edited footage, and accessing more videos of him can land people in jail. “I can’t believe I’m listening to the voice of Kim Jong Un. Someone I have only seen as a jpeg is speaking now,” South Korean Lee Yeon-su wrote on Twitter. It is a dramatic change for South Koreans, who under the National Security Act are banned on threat of jail from accessing media considered pro-North Korean.

Internet resources “sympathetic to North Korea” or, worse, praising North Korea, are banned there; and accessing such sites, or listening to Pyongyang Radio can send a South Korean to prison for several years. A good word about the northern neighbour can earn you a long stretch in jail under the Law on Combating Terrorism.(The law also provides for the death penalty, but it has not been used for the last ten years.) Anti-communist propaganda in the South is part of the school curriculum, part of the news program, part of everyday life.

After the summit, the surprised South Koreans wrote in their social media that the bloody tyrant from the North looked like a teddy bear, small, plump and cute.

And he speaks the same language as they do. And he eats buckwheat noodles, which they love.

Demonization of North Korea was the first victim of the summit: the South Koreans saw that the much besmirched Kim was quite a worldly guy, even with a very slight trace of Swiss German in his speech. Women’s diplomacy also played a role: Kim’s sister, Kim Yo Jong, made the first contact with the President of the South during her visit to the Olympics. Kim’s wife, a well-known actress, became friends with Moon’s wife. This North Korean ruler is a regular guy, they say today in Seoul.

At the NATO headquarters there was a lot of teeth gnashing and demands not to relax the sanctions, or rather to add some more sanctions. The Western mainstream media keeps saying that this summit had been just a preparation for the real main thing, for the meeting of Kim and Trump. But a sharp-sighted observer of The Guardian had noticed that it won’t be easy for Trump to do his usual bellicose sabre-rattling after the peaceful meeting of the two Korean leaders. He has been trapped. “If Trump tries to play hardball with Kim, he risks looking like a warmonger and a bully whose policies are inimical to Korean interests, north and south. Intentionally of otherwise, Moon, a lifelong advocate of detente with personal connections to North Korea, has spiked Trump’s guns.”

Actually, there is not much of reason for the Trump-Kim summit. Trump can take his troops home, and let the Koreans to settle their relations as they find fit. If the Russians and the Chinese did it, so can the Americans, too. The world, including Korea, is fully grown up and it can live without American tutelage.

It won’t be easy sailing. The US wants to keep its fingers in, and demands “complete, verifiable and irreversible” disarmament of North Korea. But Kim knows what had happened to countries and leaders that trusted the US promises and disarmed. Gadhafi and Saddam Hussein disarmed, and were brutally killed. Russia disarmed in 1991 only to find itself being treated as irrelevant. The US walked out of treaties made in the Soviet days without as much as “by your leave”. Non-nuclear North Korea would already be bombed, as it was in 1950-1953. Nothing indicates that Kim is a suicidal maniac or a new Gorbachev.

However, if the US withdraws its troops and agrees to denuclearisation of the peninsula, and if this withdrawal will be “complete, verifiable and irreversible”, there is a room for some play. North Korea would like to be treated as a responsible member of the nuclear club, on a par with England and France; it may cease nuclear tests and allow observers or suchlike.

Israel, this important power behind the Capitol Hill, bears a strong animosity against North Korea, for North Korea has been instrumental in providing missile technology to the Axis of Resistance.

The Russians are not going to great lengths for the sake of North Korea. The relations between two neighbours are cool, mutual trade is small. Russia will probably follow China’s line regarding Korea. The Chinese would like to see a more obedient North Korea, but they are used to fierce Korean independence by now. They apparently agreed to Kim’s steps during recent Kim’s meeting with President Xi.

In such a happy, happy day for Korea, I do not want to think about possible complications. For the first time in years, light has appeared in the gloomy skies of Korea, divided in 1945, and never reunited, unlike Vietnam and Germany. Maybe now it’s Korea’s turn?